It’s funny how some times scientists could have conflicts over equivalent concepts without realizing the equivalence in what they’re saying. Recently, a conflict happened between a PhD student, in his PhD defense, and an examining professor. The conflict’s topic was: How is CP violation realized in permanent EDMs?

The funny thing is that both their pictures were correct. It’s just that one picture has an assumption on how an EDM should be quantum mechanically defined, and the other measures the existence of a neutron EDM through a CP violating energy.

You could skip this part if you’re familar with CP violation and EDMs.

The concept of CP violation is a modern topic. It’s been out there for about 50 years, since the Nobel Prize discovery of CP violating Kaon dacays (Christenson et al. 1964). It also gained intresest because Sakharov (Sakharov 1991) postulated that the existence of matter in the universe instead of annihilating with anti-matter can be explained with interactions that should be CP violating (not only that, but this is one important condition).

What is CP violation?

CP is a combination of two quantum mechanical operators, $C$ and $P$. The $C$ operator is called the Charge Conjugation Operator; it simply converts each particle to an anti-particle. The $P$ operator is called the Parity Operator; it flips the coordinate system as a mirror would do, so that every right is left and every left is right. In other words, one could mathematically say that a coordinate $\vec{r}$ becomes $-\vec{r}$ after a parity operation. One more important operator that comes into play in the same game is $T$, the Time Reversal Operator. It simply reverses time progression. From this, CP violation is defined to be that systems in our world will have different physical laws when applying the $CP$ operators.

In 2002, an article was published (Greenberg 2002) that states that violating CPT symmetry implies breaking Lorentz Invariance, which is like the most fundamental symmetry we understand in our universe. The Lorentz symmetry simply means that Einsteins special relativity holds. This means that if CPT is violated, then relativity is broken, thus we would be in big trouble in our path in understanding the universe. Since all experiments agree with Lorentz invarinace, it is widely accepted that CPT symmetry is a fundamental symmetry in the universe.

The implication of CPT symmetry is that if CP is violated, then T is violated as well, to compensate for the former’s violation and result in CPT symmetry.

What is an EDM?

An Electric Dipole Moment (EDM) is defined in classical electromagnetism in its simplest form to be two charges with opposite signs and a fixed distance between them. Such a system is interesting in classical physics because applying an electric field on it will create a torque that gets it to rotate. Besides that it’s a part of an expansion called the Multipole Expansion that simplifies the treatment of many complex systems with complicated charge distribution.

For a group of particles, an EDM can be defined as:

What is the reason for the conflict?

It’s well known that a neutron possesses a magnetic moment. The magnetic moment is associated with the spin of the neutron. In quantum mechanics, measurements can be done along one axis only. Measurements using multiple axes can have many problems, in which the quantum mechanical observables (quantum numbers) become time dependant, or in other words we could say: Measurements on multiple axes would lead to not having Good Quantum Numbers. A good quantum number is a mark of a good measurement and is reproducible. Measurements that change over time (except for approximations and eigenvalues that we understand) are useless, because they’re not reproducible. Some people like to pretend to be smarter than nature, and try to find ways to trick quantum measurements on multiple axes, but such people are either mistaken or haven’t yet realized that they’re doing a mistake. Humanity spent decades trying to trick the quantum world, but failed, and a good experimental example of this is in the following paragraph.

To illustrate good measurements, I’ll refer to the well-known Double Slit Experiment. See the picture for an illustration of the experiment. In this experiment, there’s a light source, which shines light on two open slits. You would think that you’ll have two spots on the screen, but this doesn’t happen due to quantum mechanical intereference effects. 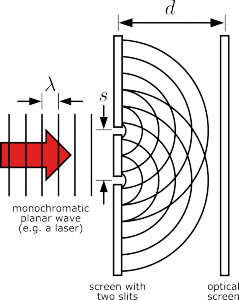 In the double slit experiment, if only one slit is open, then the position of photons can be determined (by tolerating the spread due to diffraction, which is a good approximation). Thus we can say that the position of a photon in that case is a good measurement and is well defined along the path of the photon, from the light source to the detection screen.

If we open both slits, phase interference will show up. This leads to having an interference pattern (multiple maxima and minima in intensity), in which the position of the photon is not defined and the precision is worse than before! You can never, ever define a position of a photon after the slits with the same precision that you had in one slit. In this case, a measurement of a position is considered a bad measurement. There has been many tries to trick the system, but it never works. This is due to the wave-nature of the system that puts the phases of the constituent waves into account. This can be mathematically realized by the so called Uncertainty Principle. A position ($x$) and velocity (or momentum, $p_x$) of a particle can never be determined with infinite precision. This can be mathematically written with the commutator

If the commutator would have been zero, then a simultaneous measurement with infinite precision (up to experimental constraints) is possible. A similar commutator exists between angular momentum $\vec{L}$ that is measured on different axes.

Therefore, the angular momentum can never be measured on multiple axes together. Actually, it’s not only the angular momentum. Any vector quantity cannot be measured on multiple axes. This follows from a famous mathematical theorem called the Wigner-Eckart theorem. This theorem shows that all vectors in quantum mechanics are the same up to a scaling factor. That’s why, tricking the system to measure on multiple axes is just pointless! Hence, in every quantum measurement, a single axis is defined to measure all vector quantities. It’s called the quantization axis.

Quantization axis of a neutron… is the problem!

Trouble starts now! We already know that there’s an axis for the neutron that is defined with its spin (or its magnetic moment). What if an EDM exists? An EDM is a vector quantity! Can it have another axis?

The conflict is exactly here. There are two schools of thought for this:

1- An EDM can physically exist in any direction, but we can only measure it along the spin, the well known quantization axis. If a measurement is done along a different axis, it cannot be distinguished.

2- An EDM must only exist along the spin, without caring what the nature of that EDM is, whether it’s a separation of charges or not.

This is exactly the source of conflict between the professor and the student. In fact, there’s no difference between those pictures. The reason of this is that no matter how you look at it, what matters is what we can measure, which is the same for both cases.

For the first picture, we say that if a neutron EDM is measured, it has to be measured along the spin. If the neutron wave-function is $\left| J,m_J \right>$, where $J$ is the angular momentum eigenvalue and $m_J$ is the magnetic quantum number, then

where $\hat{\vec{d}}_\mathrm{n}$ is nothing but an quantum mechanical operator that is constructed from the classical dipole moment defined above. This operator can be written as from before

where $\hat{\vec{r}}_i$ is the position of constituent number $i$. Let’s test $\hat P$ (parity) operator on this system

Parity operator changes the sign of the EDM because it changes $r$ to $-r$. The spin doesn’t flip under parity because it’s an axial vector (opposite of polar vector); thus it’s a product of two other vectors. Notice that Eq. $(*)$ doesn’t hold anymore when parity is applied and $k \rightarrow -k$. Therefore, a permanent EDM violates parity!

This means that CP is violated when a permanent EDM exists.

In the second picture, it’s claimed that we don’t know what’s going on inside, but there’s strictly an EDM that is proportional to spin. The game can be played in a different way. We define a Hamiltonian of the system

The factor 2 comes from the convention of $\mu_n$ being meaured from the eigen-energy of the system with no electric and magnetic fields up to the maximum magnetic moment (which is 1/2), leading to energy spacing of twice that for a spin-1/2 particle. And $\omega_\mathrm{L}$ is the Larmor frequency, which is the transition frequency from the two possible eigenstates of the spin.

By applying the parity operator, $\hat P$, to the energy term, we get

This is because $E$ is a polar vector, and $B$ is an axial vector. This shows that the existence of an EDM modifies the energy of the system under parity! This is another way to look at the effect of an EDM on the energy of the system upon applying $P$ operator. The same can be tested for $T$ operator which will flip only the magnetic field, since it’s an axial vector.

It doesn’t really matter how we look at it. The reason for this is that what matters in the experiment is what we measure! The picture of an intrinsic EDM that consists of separation of charges is violated through $P$ and $T$ operators. The other picture with electric and magnetic fields is violated because the system’s energy is different when appying those operators.

One thought on “What is a neutron Electric Dipole Moment (EDM)? How is it realized?”