I am very happy that Neil Tyson made the series “Cosmos”, where it is another way to communicate science to people, which is necessary in this era. I, personally, haven’t watched it, because I’m a physicist and the guy usually talks about things I learned academically. However, my wife watched it… and she told me once: “Neil Tyson said that electrons disappear from one orbit and appear in another”… and she continued talking, while I interrupted and asked… what?! How could a physicist say that? That destroys the simplest rule in relativity!

And yes, he did say that, which is crazy actually, and I’m pretty shocked that this kind of mistake would come out of such a famous scientist. Look for yourself:

Why is that wrong?

Simply, because there is no reason to believe that this is the case. Back then, when Bohr provided his semi-classical solution of the hydrogen atom, those transitions were not understood very well, and they would’ve lead to such conflicts. But, do we still deal with Bohr’s model? Definitely not! We now know Quantum Mechanics.

Before delving into Quantum Mechanics, let me pose this question: Is there any experimental evidence that electrons “teleport” from one orbit to the other as Neil Tyson said? The answer is: NO! And if there is, please let me know about them in the comments.

So, even if we would assume that Bohr made a successful model that explains the hydrogen energy levels in steady state, does that mean that it can be blindly extended to explain the dynamics of electronic transitions? Definitely not! That’s not scientific at all.

Why is this not scientific? Because in science, we create models of natural phenomena, and then test them and try to disprove them. Now what we see in the case of Bohr’s model, is that it successfully explained atomic energy levels to a good accuracy, but there is no part in Bohr’s model that talks about transitions. Therefore, inferring blindly that electrons are only in those levels is… crazy!

On the other hand, this easily breaks special relativity’s main result: Particles do not exceed the speed of light. So, what does this mean? This means that if what Neil Tyson said is true, then Quantum Field Theory, which is a superset of Quantum Mechanics, agrees that nothing exceeds the speed of light, but the very simple hydrogen atom in Quantum Mechanics… does not. How crazy is that?

Quantum Mechanics and the hydrogen atom

Explaining the Quantum Mechanics (QM) model, the QM model comes up when solving the Schrödinger equation (time independent version of it), and the result from solving that is a wave-function, where this wave-function is directly related to the probability of finding an electron spatially somewhere.

In the case of a hydrogen atom, the Schrödinger equation is solved for simply a negative electron and a positive proton. The result of this problem is presented in a wave-function that uses complicated mathematical functions, called Legendre Polynomials and Spherical Harmonics. The result is presented in a nice picture that I found on Wikipedia. 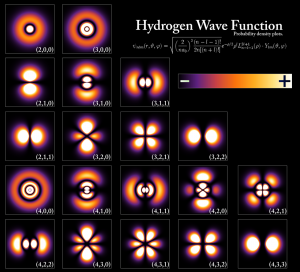 Notice that the solution is not “black and white” like Neil Tyson described it. There’s a key on the right, where a $+$ and $-$ can be seen. The $+$ represents higher probability than the $-$ regions. The first row shows the typical spherical orbits that we understand from classical mechanics (the Bohr model), while the other rows show more complicated solutions that involve angular momentum.

Notice that in those solutions, the wave-function is never zero anywhere but at infinity and specific points (lines, or nodes) in space that are infinitely small (Thanks to Lance for making me notice that more nodes exist in the wave-function)! So, according to our current knowledge of the hydrogen atom, why should we believe that electrons disappear from level to another? I think there’s no reason whatsoever.

A little more detail on transitions

Many atomic physics books treated the problem of atomic transitions in a model called “Dipole Transitions”. The model is usually accurate with relative accuracy of around $10^{-6}$. In that model, the problem of transitions is very well understood. For example, in the book Optically Polarized Atoms: Understanding light-atom interactions, there is a section called “Visualization of atomic transitions”. In it, the author shows that a transition from one state to another can be well modeled with a simple time evolution operator that incorporates the two involved states.

where $a_1,a_2$ are normalization factors, and $E_1,E_2$ are the energies of the states. We see that an oscillation of frequency (in units of energy) $E_2-E_1$ would happen, leading to the production of a photon. Then, again, why should we ever believe that electrons teleport from one atomic state to the other?

Is it just simplicity?

Probably some people will argue that Neil Tyson was simplifying the atomic model for common people, but then I would ask the question: When did simplifications start to communicate false or wrong information? I think simplifying does not justify giving people wrong information at all.

This is not a big deal, though. I think this is an advanced issue, and claiming that “we don’t know” is better than posing wrong information.

I didn’t make this article to blame Neil Tyson, and actually he’s done a very good job with Cosmos. But I made this article because I found it common in social networks that people use this wrong information, and it has to be cleared out. I actually would be very grateful to him if he would fix this mistake and replace the episode.